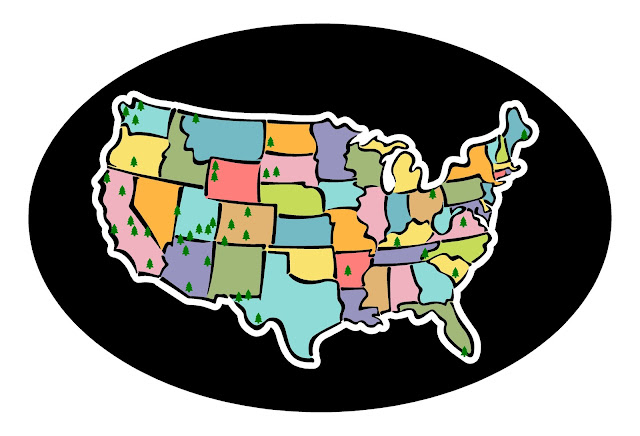 Like so many people who enjoy travelling, I’ve been dreaming up roadtrip routes since I can remember.  Growing up in Europe, most of my earliest ideas included trains and ferries.  After moving to Atlanta in middle school, those plans morphed into cross-country roadtrips by car or motorbike.  We took family trips many summers during school, and explored out West, through the Smokies, and down into Florida.  My dreams got bigger – Route 66, the Pacific Coast Highway, the full length of A1A…

Last year, I found a travel diary, photographs, souvenirs and blank postcards from a trip we took with
my grandparents in 1991.  We ventured to the Grand Canyon, Las Vegas, Yellowstone, Mammoth Lakes, Mesa Verde – the list goes on and on.  I decided to recreate the trip for my Grandmother by sending the cards in order, written as though I was on the trip (it was a rather detailed travel diary!).  While in the middle of the project, I realised that 1991 was the 75th Anniversary of the National Park Service.  That made 2016 the 100th Anniversary.

On the 25th of August of last year, word was all over the web that it was the 99th Birthday of the NPS.  I started to idly wonder if it was possible to visit all of the National Parks during the anniversary year.  A quick Wikipedia search revealed there are 59 areas designated as National Parks (there are a total of 409 units, which include the parks, monuments, memorials, battlefields…).  I really liked the thought of a roadtrip, but I quickly determined that I wouldn’t be able to visit all 59.  American Samoa, US Virgin Islands, and Hawaii were out.  Alaska, while driveable, has such a tiny window of accessibility, that I bumped those parks to a future year’s trip.

So, would I be able to visit the remaining parks (all in the Lower 48) in one year?  I popped over to the Roadtrippers website, created a new trip, and started plugging in stops.  This revealed that a number of parks in the lower 48 are not accessible by road.  After nixing those, this is the map:

48in366 – National Parks on Roadtrippers

Perfectly doable!  But on closer inspection, there are a lot states that don’t have a national park!  Seemed like I’d be skipping more than half the country if I left them off the list.  If I emphasized the driving, and included National Scenic Highways and Byways (staying off Interstates and hitting backroads as often as reasonable), would I be able to include the missing 25 states?  I couldn’t create a single map, as there are far too many waypoints, but after calculating route segments (links to come soon), I was now looking at about 24,000 miles.  Still achievable, especially since 2016 is a leap year – bonus day!

I spent the next three months trying to talk myself out of it, but with a lot of love, support, and encouragement, everything has come together; I just could not pass up the opportunity.  I have a deep love and respect for vintage vehicles, and motorhomes are no exception.  After browsing for bit, however, I had to accept the fact that, in order to reliably cross the country in a year, I would either need far more engine knowledge than I currently possess, or I’d need to go modern.  I bought a 2015 Thor Axis on the 15th of December, did a test run up to Atlanta for Christmas, and will get on the road as soon as a couple of mechanical issues have been resolved.  I was expecting some issues with the coach, but didn’t anticipate a rather major repair job on the slide-out.  Although the start of the trip is being delayed a bit, I still plan to hit all the parks and all the states by the end of the year!

To briefly recap the National Park choices on my list: